A sharp increase in the trade deficit, along with a slower pace of inventory accumulation, lead to a 1.4 decline in first quarter GDP. These two factors subtracted 4.0 percentage points from the quarter’s growth. However, consumption and investment demand were both strong in the quarter, rising at 2.7 percent and 9.2 percent annual rates, respectively. As a result, final sales to domestic purchases, a category which excludes both inventories and the trade deficit, rose at a 3.7 percent annual rate.

Inventories and the Trade Deficit

Since a large share of the items that end up as inventories are imported, strong growth in inventories is usually associated with a large rise in imports, adding to the trade deficit. This relationship is even stronger if we look at non-farm inventories (most of our farm products are domestically produced), which rose at a $185.3 billion annual rate in the quarter.

Farm Inventories Continue 16-Year Decline
Farm inventories fell at a $36.8 billion annual rate, continuing a decline that began in 2006. The current level of farm inventories is now just 53.0 percent of its level 16 years ago.

Consumption Grows at a 2.7 Percent Rate as Shift to Services Continues 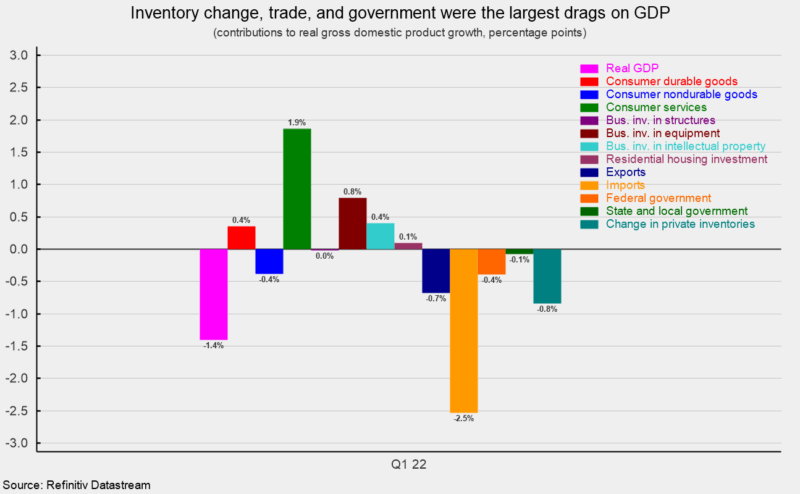 Consumption grew at a healthy 2.7 percent annual rate in the quarter, driven entirely by a 4.3 percent growth rate in services. Consumption of goods actually edged down at a 0.1 percent annual rate. This switch to services is reversing the sharp shift to goods caused by the pandemic. Even with the first-quarter numbers, real consumption of goods is still 15.6 percent above its level in the fourth quarter of 2019, while service consumption is just 0.3 percent higher.

Businesses added to inventory at a $158.7 billion annual rate (in real terms) in the first quarter versus accumulation at a $193.2 billion rate in the first quarter. The slower accumulation reduced first-quarter growth by 0.84 percentage points (see the fourth chart). The inventory accumulation helped boost the real nonfarm inventory to real final sales of goods and structures ratio to 4.00 from 3.87 in the fourth quarter; the ratio hit a low of 3.75 in the second quarter. This is still below the 4.3 average for the 16 years through 2019 (see the fourth chart).

The advance estimate of first quarter GDP showed that economic growth was weaker than we had anticipated. However, the details show that demand remained much stronger than the headline suggests. Growth was pulled lower by a sharp widening in the trade deficit and a pullback in inventory investment, shaving a combined 4pp from headline growth. Abstracting from this, domestic demand expanded by a healthy 2.6%, a big improvement from its 1.5% pace in the second half of 2021.

Chatter about recession has been building, and the negative print on this morning’s GDP is likely to further fan those fears. While the possibility of a 2023 recession can’t be ruled out, current momentum in the economy remains too strong for things to suddenly sputter out. The labor market remains as tight as ever, which is manifesting in healthy wage gains helping to partially insulate households from higher food and energy costs. Moreover, recent data points on housing construction, industrial production and durable goods orders all point to continued momentum on the domestic demand front as we move into the second quarter. We look for GDP to rebound to over 2% (annualized) in Q2.

The first quarter’s growth rate was a hair below the 2.2 percent rate of the fourth quarter. It is 14.6 percent above the rate in the fourth quarter of 2019. It is unlikely that the Fed’s rate hikes will have an immediate effect in slowing construction, as the run-up in prices and supply chain issues have created a considerable backlog. (Housing starts are now running at close to a 1.8 million annual rate, while completions are near 1.3 million.) 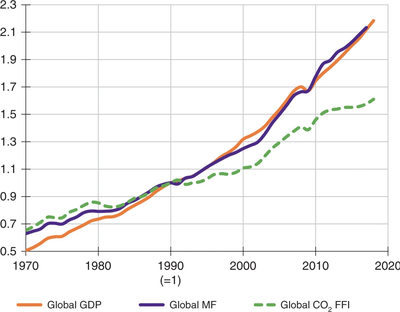 Higher rates have already been a huge hit to mortgage refinancing. They also have slowed sales, which will be a dampening factor in consumer durables, as fewer people moving will mean fewer purchases of refrigerators and other household appliances.

Government Spending Was a Drag on Growth in the Quarter

All categories of government spending fell in the first quarter. The 2.7 percent rate of decline subtracted a 0.48 percentage point from the quarter’s growth rate. This was the second consecutive drop for state and local spending, leaving it just 0.6 percent above the level in the fourth quarter of 2019.

Joe Biden’s government said this Monday that Will lift many sanctions on Cuba planted during the Trump era, Facilitating immigration…

The government has vetoed in Congress the processing of two amendments to the PP, aimed at making permanent the suspension…

It’s a big week for tech firm earnings reports. Google and Microsoft have already reported on Thursday, after markets close,…

Chambers, Guanajuato.- Guanajuato researcher Leonardo Amezcua Ornelas announced that, in Acambaro, Guanajuato. Bull Hill in the Municipality of KeyThere are…

The Food and Drug Administration announced on Thursday a proposed ban on menthol cigarettes and all flavors in cigars, a…