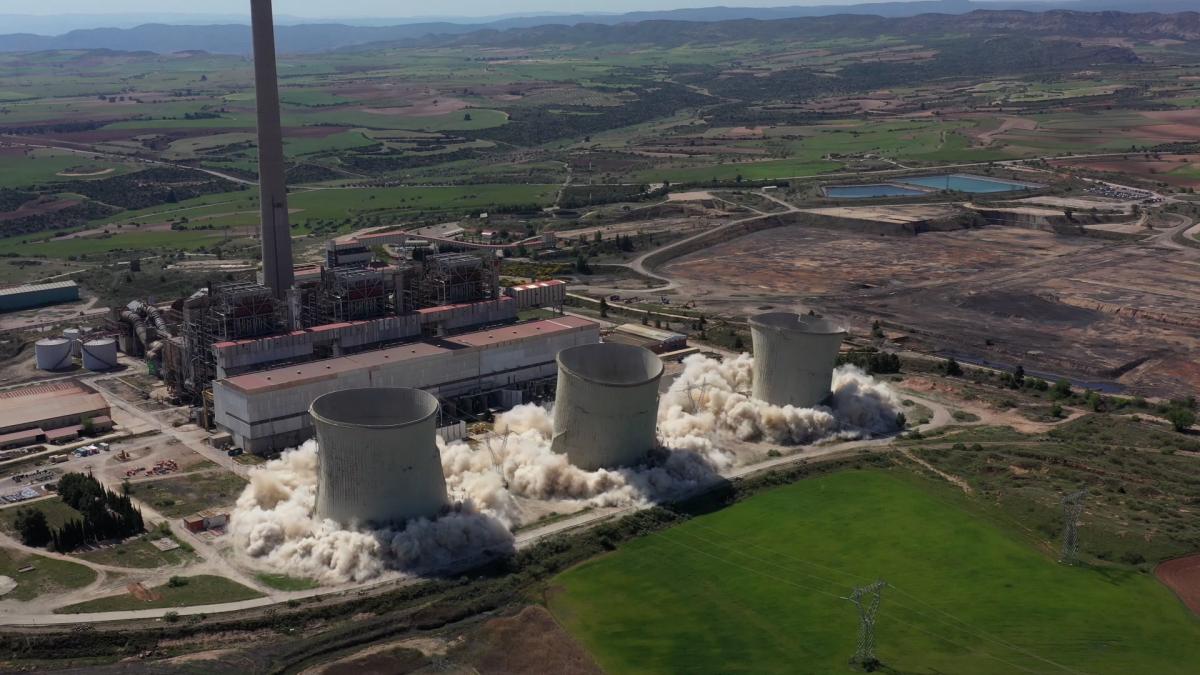 Bajo Aragon has lost one of its most recognizable images, one of three cooling towers at the Andesa Thermal Power Plant in Andorra blown up simultaneously as part of dismantling work at the facility, which Stopped working after forty in June 2020. Years of life and this have hurt neighbors before a future that they see as uncertain.

In a few seconds, this icon of the region has fallen, the history of mining in the province, in what was the first triple and simultaneous demolition carried out in Spain, which has been followed in silence by nearly a hundred Endesa technicians, Enel and Subsidiaries, representatives of administration and official bodies, 70 journalists and 7 digital experts from a viewpoint located 800 meters away.

In addition to hundreds of neighbors and political representatives, such as Teruel Exist deputy, Tomas Gitte, who have followed him from the surrounding area.

The concrete towers, 107 meters high and 83 meters in diameter at their base and 50.7 meters at the top, each weighing 12,577 tons, occurred at 11:30 and caused the admiration and congratulations of the technicians, one “found” and among those responsible for Endesa. bittersweet” sentiment, and “sadness and sadness” among some neighbors and former employees.

The demolition has been “an important milestone” within Endesa’s decarbonization process and the plant’s dismantling, which began in March 2021 with a detailed plan to remain safe and meant the towers produced more than 6,000 tonnes. has done. Materials containing asbestos and treated in accordance with current law, as explained to the media by Andesa’s Dismantling Manager, Beatriz Muniz.

After the blasting, which used 275 kg of explosives placed at the bottom of the structures and established a circuit with 37 pools of two cubic meter capacity, detonated simultaneously to avoid a cloud of dust Now, 40,000 tonnes of concrete has been manufactured which will be used to fill the gaps in the ground.

Endesa’s general director in Aragon, Ignacio Montaner, has admitted that he had “a knot in his stomach” after the three towers disappeared from the skyline, but also had “excitement” for a future project that Endesa had for Andorra and was planned. sector and to continue to generate “employment and wealth”.

A project that plans to replace this coal power plant with 1,800 MW of renewable energy power and which will continue to maintain the link between Endesa and the region, as it has existed for these 40 years, he pointed out.

In this regard, Rafael Gonzalez, General Director of Generations of Endesa, stressed that the company is “not leaving the field”, but will continue in the field and the first stone will be laid in the coming weeks.

For Alejo Galve, Secretary General of the UGT in Teruel and eventual chairman of the Thermal Plant’s Works Council, today has been a “sad” day, although he believes it will be a “future hope” for the proposed alternatives and believes That’s what the employment required for Andorra was “for many years”.

About 250 employees of Andesa and subcontractors were at the plant when it closed in 2020, he recalled in statements to Efe, of which between 80 or 90 of the latter went to “seek life” in communities such as Andalusia, Catalonia Huh. Or Castilla La Mancha.

Pedro, one of Andorra’s former thermal workers and neighbor who has already retired, expressed his grief to EFE after the towers collapsed as he spent “many years” in them, he was “at last to leave”. One” and believes that citizens of the region feel “deceived” because “there are many promises but few realities and no alternative”.

Joseba Diaz Martínez, a former employee at the plant who did not want to take part in the dismantling work, is also pessimistic about the future of the area and has come to see the towers come down this Friday despite a “very difficult” day . He believes residents and politicians in the area “should have done more.”

The process of dismantling the thermal plant will continue and next year will again experience a critical day when the 343 meter high chimney will be blown up.

The thermal plant in Andorra, one of the pillars of Teruel’s economy, was built between 1974 and 1979 and opened in 1981, producing 224,000 GWh in its four decades of operation, the peninsular electricity supply for the entire year. consumption, for which it required 142 million tonnes of coal, of which 110.9 million were domestic coal and 31.7 million were imported coal.

Alicia Cervantes and what she lacks in Chivas to achieve

Twelve-month Euribor will record a fresh increase in the month of May, after leaving negative ground for the first time…

The flight routes will be announced shortly and are expected to start operations this year. Similarly, the Navy will also…

Mexico.- This Thursday, the Supreme Court of Justice of the Nation (SCJN) dismissed an appeal for review submitted by the…